Walk the streets of Singapore today, and you will see skyscrapers, high-rise residential, and sleek modern buildings. However, you’d also see scattered throughout the island, many quaint shophouses of varying styles. They range from the early generation shophouses in Chinatown, to richly ornamented Peranakan-style shophouses on Koon Seng Road.

Nestled amidst our developed city’s landscape, they stand out as a remembrance of an era past. Singapore shophouses truly are icons that reflect our history and heritage. Shophouses along the old Hock Lam street in Singapore during the 1960s. It is the area where present-day Funan Mall stands today.
Picture Source: National Archives of Singapore

Through the decades, the government demolished many old buildings to make way for the new. But more than 6,500 shophouses still stand today, gazetted by for conservation and carefully preserved.

Let us venture a little deeper to understand and appreciate why.

Shophouses in Singapore were built as early as the 1800s. They traditionally served as a home and place of business for a merchant and his family. The fundamental form of the shophouse was originally based on traditional Chinese houses in southern China, where the majority of Singapore’s early immigrants were from.

During the early days, shophouse foundations were made from locally-sourced and -manufactured bricks set in lime mortar.

The shophouses were either two- or three-storeys tall, with business premises on the ground floor, and living accommodations on the upper floor.

Towards the turn of the century however, richer business owners also sometimes built townhouses as a dedicated residence for themselves. They would modify existing shophouses by adding an extra storey and enhancing the façade with beautiful decorative embellishments. The ground floor, which would have been used for a shop, then functioned as a main hall for receiving guests instead. 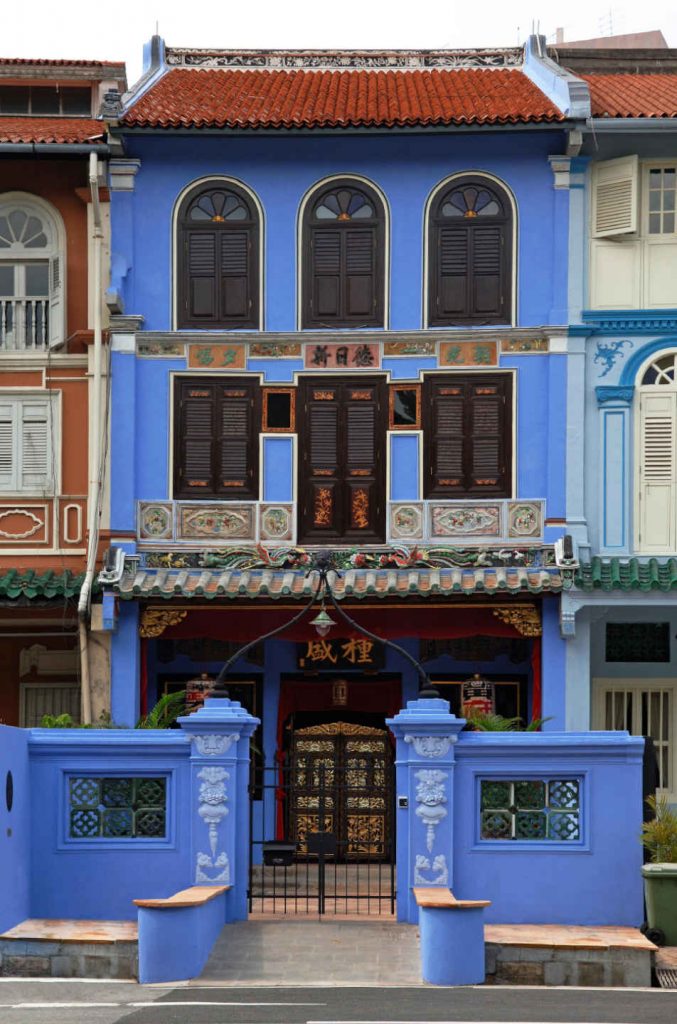 Through the years, shophouse styles evolved to reflect the changing needs, influences and prosperity of the country and its people.

According to the Urban Redevelopment Authority (URA), shophouses in Singapore can be categorised into six architectural styles. Each style had a set of defining characteristics influenced by trends of the era.

Together, they span more than a hundred years in our country’s history. You can read more about these different shophouse styles here: https://roots.sg/learn/stories/singapore-shophouses/story Key Elements of a Shophouse

Shophouses share certain defining features, no matter the era they were built in. Here are some of their key elements.

The Five-Foot Way: The upper storey of a shophouse was supported by columns. It protruded forward to create a covered porch in front of the shop. The neighbouring units were similarly built, and stood side-by-side, separated by party walls. Together, they formed a continuous covered path quintessentially known as the “five-foot way.” It was so-named because that was the minimum width regulated by Sir Stamford Raffles in his town plan for the fledgling settlement of Singapore.

Five-foot ways were always a bustling area full of activity. Street barbers, cobblers and numerous other vendors and hawkers would ply their trade here. In fact, this often congested the five-foot ways and streets outside, sometimes even leading to chaos and conflict amongst the merchants and with the authorities. Nonetheless, those who grew up during that era would fondly remember the five-foot way as a place where you’d meet neighbours and friends, shop, and run errands each day. There is a lot of nostalgia surrounding the five-foot way. So much so that there was even a drama series created by the Singapore Broadcasting Corporation (SBC) in 1987, called ‘Five Foot Way 五脚.’ The popular program portrayed the heart-warming stories and day-to-day life of five-foot way merchants and shophouses’ residents. Chinese merchants would inscribe the name of their business in large Chinese characters on a wooden signboard over the door. The Skywell: A skywell, or airwell, is a little patch of open space inside the shophouse for letting in light and ventilation. Before air-conditioning, this was a very effective way of cooling the interior whilst the warm, humid Singapore weather blazed outside. This concept was a key feature in traditional Chinese architecture.

The rich often used the skywell as a fountain or fishpond as well, feeding-in rainwater directly from the roof. Chinese consider fish and flowing water to be auspicious, and such skywells were a spot of tranquility from the bustling streets. A skywell / airwell preserved inside a present-day shophouse (Picture Source)

The Rear Court: The rear court was an open space at the back of the shophouse on the lower level. In the early days, it functioned as a service area and was usually where the outhouse was situated.

The Windows: On the upper storeys of a shophouse, the windows were either French full-length windows with internal railings, or casement windows with timber shutters. Earlier shophouse styles featured simple windows without much embellishment. Later on however, shophouse owners added more decorative elements to the windows as well.

Floor Tiles: The ground floor of shophouses and their five-foot ways were usually paved with terracotta square tiles. However, wealthier neighbourhoods had Victorian-style tiles manufactured in Europe. These boasted much more elaborate geometric and floral patterns. Life Inside a Chinatown Shophouse

Wealthier folks could afford to stay downtown and in the suburbs like Katong in the East Coast of Singapore. The working class however, like Samsui women and Coolies, dwelled mainly in basic shophouses in and around Chinatown. This was closer to areas of commerce and work. These no-frills shophouses were meant to merely serve as a place of lodging and rest for workers and their families. Therefore, comfort was usually the last thing on their minds.

During the 1950s in particular, housing was of short supply. As a result, enterprising landlords partitioned the interior into tiny eight feet by eight feet cubicles in order to rent them out to as many people as possible. At times, there would be as many as a hundred people living in a single shophouse! A recreated shophouse interior at the Chinatown Heritage Centre (Picture Source). It illustrates the small and basic living quarters of the working class in a typical Chinatown shophouse. We would probably find this intolerable. In truth however, most were thankful just to be able to secure a space in one of those cubicles, as there were those who were even less fortunate and could only rent a temporary foldable bed along the corridor.

Living in such close quarters however, meant that neighbours ended up sharing many aspects of their lives – such as doing their laundry and cooking together in the common kitchen. Children played together, and adults usually lent a helping hand to each other. As a result, they were often privy to each other’s day-to-day lives, and shared in their struggles and joys.

Though living conditions were not very ideal, there was definitely a stronger sense of community. And at the end of the day, these shophouses and the cubicles within were homes – for the people who lived and grew up there. Given the Singapore Shophouse’s important link to our history, one may be glad to learn that the government has gazetted over 6,500 shophouses for conservation today.

Almost 50 years have passed since people moved from shophouses into HDB public housing. As such, shophouses have since been refurbished for various other contemporary uses, such as clan houses, modern businesses, as well as high-end residential property for wealthy locals and foreigners.

Some shophouses have also been inherited by 3rd and 4th generations of the family. These family members continue to live there or run their own businesses from the shophouse.

In order to ensure that the important heritage elements of shophouses are preserved, the URA published a set of guidelines for features that must be preserved when present-day shophouse owners and tenants carry out renovation works. Here at miniature stories, we lovingly recreated a pair of 1/26 Singapore Heritage Shophouse models. We replicated many tiny details that bring them to life. For example, the Chinese characters above each window, the Malay-inspired grilles in the Center windows, as well as the motifs under the windows. When paired with our character figurines, the scene truly comes alive. We truly hope that they offer a nostalgic glimpse of the early days in Singapore. A beautiful flower motif on our white shophouse model